Private client partner Lesley Lintott has been named winner of the Lifetime Achievement Award at the inaugural Citywealth Power Women Awards which were held in London on 22 January in the presence of key figures from the private wealth industry.

Highlighting the female leaders and opinion formers of today and tomorrow, the Awards have been introduced to recognise individuals and companies who maximise the potential of women in wealth, as well as support care giving initiatives and celebrate diversity. They are intended to establish a platform for best practice in the future.

Lesley was honoured for her significant and unique contribution to the sector during a career which spans over 40 years. In addition to leading Penningtons Manches' firmwide private client and tax team, she served for 11 years as managing partner until 2008 when she returned to full-time client work. She continues to feature in Chambers Global, Citywealth’s ‘Top Legal Power Women’, 'Top 25 Lawyers' and 'Top 20 Women in Private Wealth Management', Private Client Practitioner’s 50 Most Influential and Legal Week’s 'International Trusts & Private Client Elite'.

In her acceptance speech, Lesley expressed her gratitude for the support she has received from friends and contacts throughout the legal and private wealth fields. She also paid tribute to the strength in depth and quality of the private client and tax team at Penningtons Manches, which was named Law Firm of the Year at the Citywealth Magic Circle Awards in 2014.

To view the full shortlist for this year’s Power Women Awards, which were hosted by Baroness Margaret Prosser and Dame Esther Rantzen, please click here. 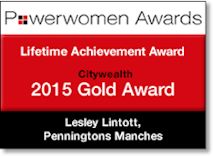