The designer brand Pierre Balmain (Balmain) has recently lost its appeal to the CJEU to register the figurative trade mark of a lion’s head surrounded by interlinking chains (as pictured) for goods in class 14 (including cufflinks and jewellery) and class 26 (including knobs, buttons, and shoe studs).

It did, however, succeed in registering the mark against classes 9 (scientific, nautical, cinematographic and optical instruments) 18 (leather products) and 25 (clothing). The court’s refusal was primarily based on Article 7(1)(b) of Regulation 2017/1001 – that the trademark was devoid of distinctive character. Below is a summary of a number of interesting points thrown up by the French judgment.

Balmain submitted that the court was wrong to apply case law relating to 3D marks which sets a higher bar for distinctiveness (see, for example, case law surrounding registration of wine bottles as trade marks) when the mark applied for was purely a 2D image. Although, on a practical note, Balmain may not have done itself any favours by submitting an application on the same day for a 3D trade mark including the same figurative mark to be potentially reviewed by the same examiner. The court roundly rejected Balmain’s objection, stating that the application of the mark to 3D products such as buttons or cufflinks meant that the mark could not be considered independently of the form it would ultimately take.

Applying 3D mark case law was therefore entirely appropriate. In doing so, the court reiterated firstly that the average consumer is not accustomed to making an inference about the origin of a product by reference to its shape, in the absence of any textual marking, and secondly, that the more the shape of a product corresponds to the most normal or likely shape associated with that product, the less likely it is to satisfy any distinctiveness criteria. A quirky example of where this presumption was overcome was in the case of an igloo-shaped pet kennel which was considered sufficiently unlikely as a shape for a kennel that it met the ‘distinctive’ condition. By contrast, as the court pointed out, there are many buttons, cufflinks or jewellery items adorned with a lion's head image and as such the incorporation of this design onto such a product would not be a departure from the norm.

Balmain attempted to argue that the mark was distinctive given that it was an original, artistic design. This was firmly rebutted by the CJEU which reiterated that originality did not necessarily do anything to lend the mark a sufficiently distinctive character which would help the relevant public to identify this particular lion’s head image from any other. Balmain further claimed that the use of these buttons on a variety of Balmain clothing was enough to educate the consumer to derive their origin as being a Balmain design and thereby acquire distinctiveness. This was found to be an erroneous and circular argument - indistinctive buttons cannot help distinguish the clothes, thereby gaining their own distinctiveness.

Specialised relevant public does not offset lack of distinction

A further point of discussion revolved around what the relevant public was defined as. Balmain claimed that the relevant public for class 26 would be specialised consumers in the fashion sector, ie manufacturers, rather than an average consumer in the European Union. This too was dismissed by the court, which only allowed a specialised relevant public in relation to ‘press-studs for footwear (fasteners)’. In any case, the conclusive view of the court was that having a more specialised relevant public does not justify having a less distinctive mark, regardless of whether they might be more discerning; a fashion guru would still need to be able to pick out this particular lion's head image imprinted on a cufflink, for example, from any other and identify it as Balmain’s mark, and the court was not willing to accept that they could.

All in all, a relatively minor setback for the major brand but a clear message on the interaction between the distinctiveness of a mark and the class of goods it applies to, particularly the effect of moulding a 2D mark onto a 3D product, and confirmation that the degree of specialisation of the relevant public cannot counteract a lack of distinctiveness. 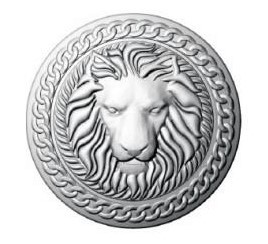 This article has been co-written with Mary Clare Palmer, a trainee solicitor in the commercial, IP and IT team.