Jeremy Clarke Williams, head of reputation management and privacy at Penningtons Manches Cooper, has secured an apology from Reach plc (publisher of the Leicester Mercury and its Leicestershire Live website) on behalf of Nigel Pearson, the football manager whose career has included stints at Leicester City and Watford.

The apology relates to an article published on the Leicestershire Live website on 19 August this year, entitled ‘I stumbled off’ – Former Leicester City favourite lifts lid on infamous Nigel Pearson bust-up. It alleged that during their time together at Leicester City, former captain Matt Mills had been confronted by an unprovoked Nigel Pearson and that the two had come to blows following a conversation in the manager’s office.

Leicestershire Live had not contacted Mr Pearson to establish the true position before publishing the false and damaging claim. The publication now accepts that there was no physical confrontation or contact between Nigel Pearson and Matt Mills and has today published an unreserved apology for the distress caused. 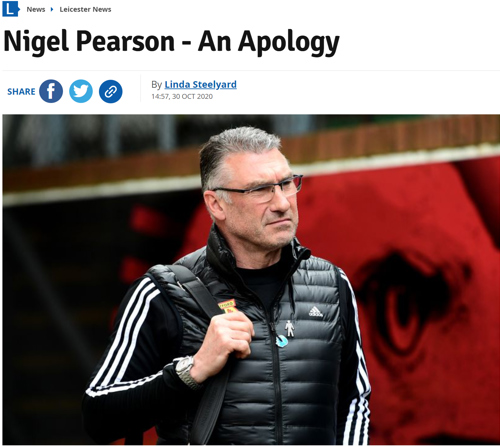 Jeremy Clarke Williams commented: “Stories relating to football clubs, their players and managers are amongst the most popular and widely read across both national and local media outlets; the impact of false reporting can have a deep and lasting impact. My client is pleased that Leicestershire Live has apologised and accepts that there was no physical confrontation or contact between him and Mr Mills.”

Mr Pearson was supported by the League Managers Association throughout his claim.