Head of private client and tax Clare Archer and senior counsel Chris Lintott have been named in eprivateclient’s 50 Most Influential 2017, a list of those deemed to be leaders when it comes to providing the best possible services to meet the needs of wealthy individuals.

Each year, eprivateclient, the leading website and news service for private client practitioners, draws up a definitive list of movers and shakers in the UK and UK offshore private client sector and this year Penningtons Manches is one of only a handful of organisations across the industry with more than one practitioner appearing on the list.

The process begins with an open call for nominations from which a shortlist is drawn up. Factors such as achievements and career progression are then considered by the publication before the final list of leaders is agreed. The winners will now be honoured at a champagne reception hosted by Sarasin & Partners on Wednesday 14 December. 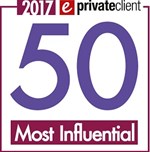