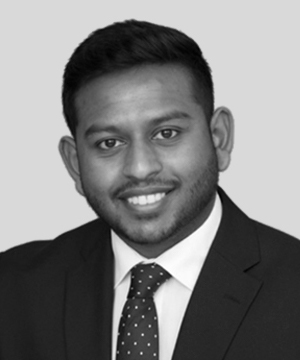 Arjun is an associate in the family law department in Guildford. He advises on all areas of family law including divorce, financial remedy proceedings, children matters, cohabitation disputes, nuptial agreements and domestic violence.

Well-liked by clients for his friendly and approachable nature and his dedication to achieving the best outcome for them, Arjun is committed to dealing with family law disputes in a compassionate and constructive way. He previously advised at legal clinics held by various organisations, such as the Surrey Law Centre and the Citizens Advice Bureau, across numerous locations in Surrey and the surrounding areas. His work has recently been recognised by winning the Rising Star Award at the Surrey Law Society Legal Awards 2019. He is a committee member of Surrey Young Resolution and a member of Resolution.

Earlier in his career he gained extensive experience in mental health issues. He attained Law Society panel accreditation in mental health law and has represented many patients before the First-Tier Tribunal (Mental Health).