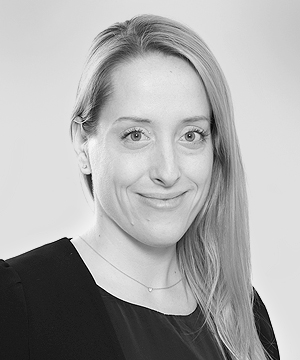 Kate is a family lawyer in the London office. She studied English Literature at the University of St Andrews, graduating in 2005 before completing both the GDL and LPC at BPP Law School in London. She joined the firm in 2010 as a trainee solicitor, qualifying into the family department as an associate solicitor in 2012, and became a senior associate in 2019.

She has a particular focus on matters involving complex financial issues as well as those with an international dimension. Kate has recently been involved in financial proceedings in the Central Family Court and the High Court as well as a number of disputes relating to children. She also undertakes work on both domestic and international marital agreements.

Kate is a member of Resolution and has had a number of articles published in New Law Journal on marital agreements, cohabitation claims and transparency issues. Clients and peers have described Kate as ‘reassuring’, ‘brilliant’ and ‘exceptionally able’. Most recently Kate was listed as a 'future leader' in the prestigious Citywealth Future Leaders List.