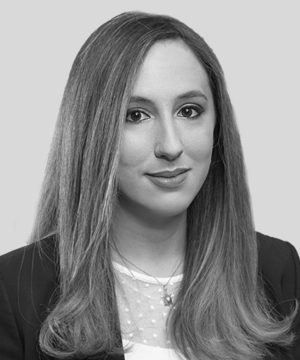 Lucrecia is an associate from our Madrid office and has experience in providing legal advice to Spanish and English insurers, for whom she has handled claims of an international nature in matters of personal injury, professional and product liability.

She advises on a range of contentious and non-contentious issues and has particular expertise in civil liability claims in the Travel and Tourism sector, especially in the Spanish and Latin American markets. She has experience in attending Court in Spain and in the drafting of affidavits on Spanish law to be presented as evidence in judicial proceedings in the United Kingdom.

Lucrecia joined the firm in 2017. She previously trained and gained her expertise at a Top 25 UK Law firm. She read Law and majored in International Legal Studies at ICADE and later undertook a Master’s degree in Access to Advocacy, specialising in Private Law. She was then admitted in 2015 to the Madrid Bar. Lucrecia speaks fluent Spanish and English and is currently improving her French knowledge.