Home » News & publications» Latest news» Stroke awareness: the significance of TIAs and the window of opportunity to avoid a life-changing stroke

Stroke awareness: the significance of TIAs and the window of opportunity to avoid a life-changing stroke

Stroke is a syndrome that involves neurological disturbance that lasts more than 24 hours and can be fatal. A transient ischaemic attack (also known as a TIA or mini-stroke) usually only lasts a few minutes and does not often cause permanent damage. However, it is important to be aware that a TIA can be a crucial warning sign of a future stroke – and a potential opportunity to prevent it.

Stroke is the fourth most common single cause of death in the UK and can lead to many complications. About 230 out of every 100,000 people experience their first-ever stroke every year, according to the National Institute for Health and Care Excellence (NICE). Strokes are split into ischaemic strokes (85%) which involve a blood clot that prevents blood flow to the brain, and haemorrhagic strokes (15%) which involve burst blood vessels in the brain. The latter can be deadlier, and often presents with sudden onset headache – a warning sign that might not occur during ischaemic stroke.

There are many risk factors for stroke, including:

However, strokes are not limited to older or less healthy people. About 400 childhood strokes occur every year in the UK. Andrew Marr was in his 50s and a very active runner when he suffered a stroke in January 2013, while Michael Johnson, American Olympic sprinter, suffered a stroke in September 2018 at the age of 51, following which he has campaigned for more funding of stroke research in the UK.

The warning signs of stroke are well known but worth revisiting; the American Heart Association found in October 2020 that 30% of adults younger than 45 do not know the five most common symptoms of a stroke (numbness of face, arm or leg; confusion or trouble speaking; difficulty walking, dizziness or loss of balance; trouble seeing in one or both eyes; and severe headache). The FAST assessment system (pictured below and taken from the Stroke Association) for stroke symptoms is used by ambulance services. 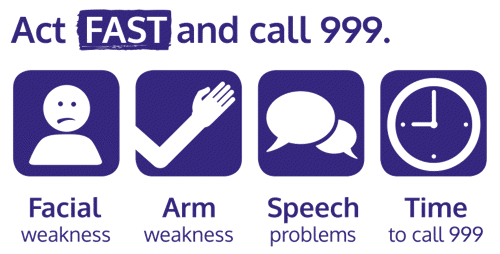 TIAs often occur days or even hours before a stroke. It is vital to get assessed promptly for stroke risk factors if a person has briefly suffered stroke symptoms or if it is suspected that they or someone they know has suffered a TIA.

In the acute phase, the symptoms are indistinguishable from stroke and include facial paralysis, slurred speech and loss of vision. With a TIA, the FAST guidelines still apply, and the patient should have neurological assessment without delay in an emergency department or TIA clinic.

The significance of TIAs – why is it so important to identify them correctly?

Following a TIA, intervention may prevent a future stroke and irreversible neurological injury. Investigations that should take place following a TIA may include:

Depending on the findings from the investigations, prevention of stroke may include:

Taking aspirin after ‘warning symptoms’ appear can reduce the risk of stroke. Professor Peter Rothwell, clinical neurologist of Oxford University, corroborates this and has stated that ‘immediate treatment with aspirin can substantially reduce the risk and severity of early recurrent stroke.' [3]

CT brain scans or ultrasound imaging can also save lives following a TIA, because they can reveal tissue damaged due to poor circulation as well as narrowing of the blood vessels. If these risk factors are apparent, they suggest another stroke within 90 days is much more likely. [4]

The effect of the pandemic on stroke care

Like many other conditions, strokes and TIAs have taken a backseat during the Covid-19 pandemic, with funding for stroke research having decreased since the start of the outbreak. At the same time, stroke experts are concerned that many people may have been put off from calling an ambulance for symptoms of stroke during the pandemic, perhaps because they are concerned about burdening the NHS or believe that there are more urgent emergencies. This is borne out by a study conducted in Denmark that showed that at the start of lockdown in 2020, the admission rate for ischaemic stroke and TIA were significantly lower - perhaps due to fear of contracting Covid-19 or of adding to an overburdened health system. [5]

Research also suggestions that Covid-19 is linked to strokes, because it causes microthrombi (small blood clots) which can potentially lead to cardiac injuries and ischaemic stroke, [6] especially in female patients. [7]

Management of suspected stroke includes giving aspirin immediately and arranging an appointment with a stroke specialist within four hours of a patient arriving at an accident and emergency department. [8] Suspected ischaemic strokes are often treated with thrombolysis, a thrombectomy and blood pressure control. Even with these steps, experiencing a stroke can be a life-changing event.

The outcomes of stroke patients vary widely. Some patients never recover movement in one side of their body after a stroke, while complications of treatment can include thrombosis. It is possible to fully recover from a stroke, with proper rehabilitation and physiotherapy, but many people suffer depression or have a lifelong disability. Additionally, ability to work and sexual function are often impaired. There can be cognitive effects such as aphasia (impairment of language) and dementia, as well as physical effects such as dysphagia (inability to swallow) or inability to walk without sustained therapy. Vision can also be affected long-term.

The message is clear: if a person experiences stroke symptoms, they should call 999. If vision rapidly gets foggy or deteriorates for no apparent reason, it could be a TIA and anyone affected should seek immediate medical attention to prevent long-term damage.

In 2021, Alan Ablett, an ex-local Labour party chairman from Beverley in East Yorkshire, was awarded £950,000 after his doctors failed to prescribe him blood-thinning medication following a series of TIAs which resulted in a life-changing stroke [9]. If an individual has suffered a stroke and is concerned that warning signs were missed, they may be entitled to compensation if proper treatment would have prevented the stroke.

The clinical negligence team at Penningtons Manches Cooper has also achieved settlements for clients who have suffered stroke following negligent treatment of TIAs or cardiac defects which, had they been treated earlier, would likely not have resulted in the subsequent strokes.

If you would like to discuss any concerns relating to this article, you can get in touch with a member of the clinical negligence team for an informal discussion about your care.

This article has been co-written with Dominik Young, a trainee solicitor in the clinical negligence and personal injury team.