In the last few years, the UK’s growing population, coupled with a housing shortage, has led to more and more renters sharing a property in urban areas. The management of such properties, however, has not always been regulated.

When Oxford City Council introduced its city-wide, mandatory licensing scheme licensing for houses in multiple occupation (HMOs) in 2011, it became the first council in England to do so. The scheme, which comprises a mandatory scheme and an additional scheme, ensures that HMOs meet certain standards in respect of space, health and safety, and energy efficiency.

Today, almost half of all Oxford homes are privately rented, so it is no surprise to hear that the council voted to renew its additional licensing scheme for HMOs. The existing scheme ended on 23 January 2021, and the new scheme will take effect from 10 June 2021.

This article explains when a licence is required and how to obtain one. There will be no material change to the additional licensing scheme when it takes effect, although changes have been made to the application process and the conditions that the council can impose when giving a licence.

It is worth keeping in mind that during the consultation process that reviewed the scheme, the council suggested introducing a further selective licensing scheme to apply to all private rented residential properties that do not fall under the current mandatory or additional licensing requirements. The council is submitting an application to the Secretary of State with the intention that, if successful, the further scheme will be introduced in Spring 2022 at the earliest and will apply to all properties within Oxford, except those in the Holywell ward.

What is an HMO?

A property is an HMO if:

HMO regulations can apply to individual flats as well as houses. A building can also be an HMO – referred to as a ‘s257 HMO’. A licence for a s257 HMO will only cover the building (ie the common parts), and not individual flats. Further licences for those flats may be required if they are HMOs in their own right.

Whether an HMO is ‘large’ or ‘small’ has a bearing on the type of licence needed. A large HMO is the main or only residence of five or more occupants from two or more households. In England, these require mandatory licences. Smaller HMOs, however, are subject to the additional licensing scheme that the council has adopted and now renewed.

The licensing scheme for HMOs is distinct from planning regulations which must also be observed. The use classes for HMO properties are:

Do I need an HMO licence?

The flow chart below identifies when you need a licence. If the property is within a converted building, you will also need to consider whether the building needs its own s257 HMO licence.

There are several exemptions to HMO licensing. You would not need a licence if: 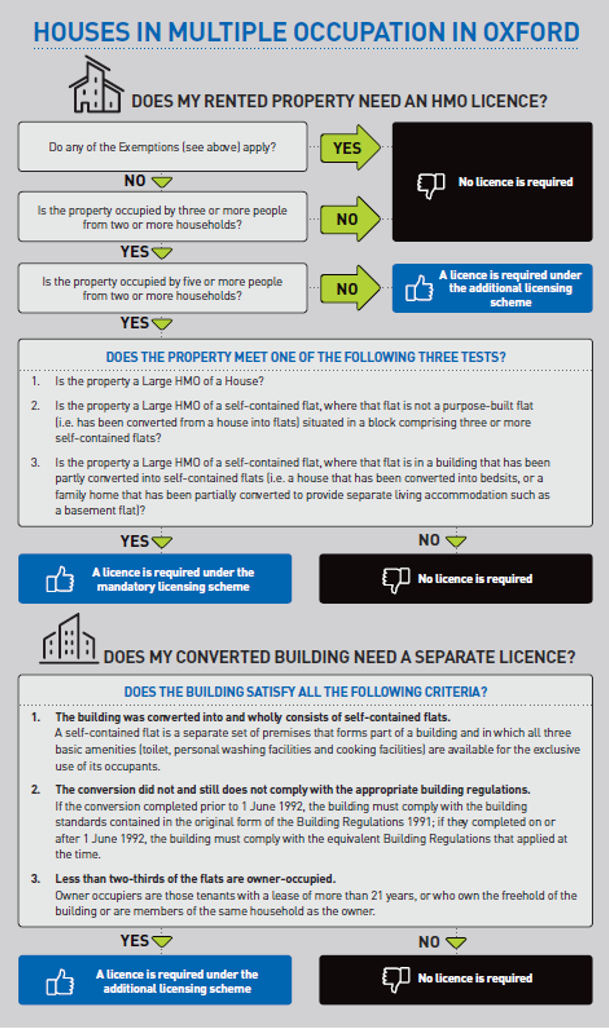 How do I apply?

If you had an HMO licence that has now expired, or establish that you should have had one, applications are already open for a licence under the renewed scheme (linked here).

If you fail to apply for a licence, you will be in breach of s72(1) of the Housing Act 2004 and could face a civil penalty of up to £30,000, or an unlimited fine on summary conviction in court. The council has previously imposed a fine of £25,298 to one property owner for failing to license an HMO. In this specific case the penalty was made up of a financial penalty of £7,149 for failing to license the property, and an additional £18,149 for four separate fire safety offences. The landlord had also been previously convicted in 2015 of a related housing offence.

The council has a helpful FAQ page on its website, but if you have any further question about HMOs, please do not hesitate to get in touch.