Fast broadband for all? The new Universal Service Obligation

What is the Universal Service Obligation (USO) for broadband?

Since 20 March 2020, the USO has provided a new right (which the UK Government describes as a “safety net”) to every eligible home and business to request a decent and affordable broadband connection from BT (or, for properties in Hull, KCOM).

In December 2019, Ofcom estimated that approximately 155,000 premises (0.5% of UK premises) would potentially be eligible for the USO, taking into account fixed-line and wireless connections.

How does the scheme work and is there a cost?

Those who believe they may be eligible for the scheme should check the relevant provider’s website: linked here for BT or here for KCOM (in Hull).

A home or business’ eligibility is based on the following criteria: 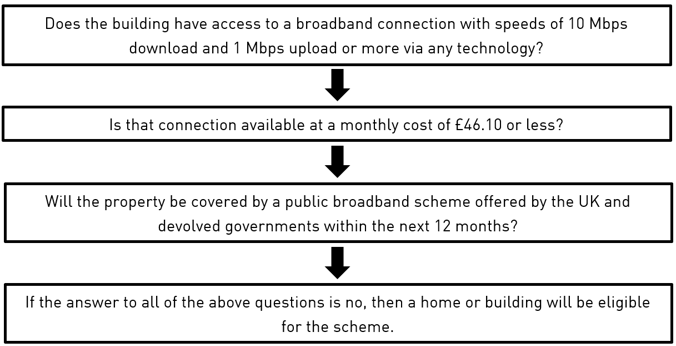 Once connected, beneficiaries pays the same price for the new broadband service as anyone else on the same package, with a cap of £46.10 per month.

How long does it take to get connected?

Ofcom has set standards for delivery on requests for connections:

Opinion: will the USO deliver?

Whilst Ofcom reported as recently as December 2019 that only 54% of premises had taken up superfast broadband UK-wide, compared with 94% of premises that had access to a potential connection, it seems, at least to the writer, that the technological and policy landscape has changed significantly, particularly in recent months, with a paradigm shift since Covid-19 forced the closure of almost all businesses’ physical offices and increased the demand for home working connectivity and streaming services.

The Government first published “A New Broadband Universal Service Obligation Consultation” in March 2016. There was, even then, a concern that the 10 Mbps speed would be outdated by the time the USO came into force.

For those who do not currently have access to decent and affordable broadband the USO offers some hope of obtaining broadband, which would give them real access to the online world. However, in light of the shift towards home and flexible working, will 10 Mbps download and 1 Mbps upload really be sufficient?

The Digital Economy Act 2017 sets out two mechanisms that enable the UK Government to initiate a review of the USO:

How the USO changes over time, and whether it proves to be of material use to those struggling without access to a decent and affordable connection, remains to be seen.

This article has been co-written with Matthew Letts, a paralegal in the commercial dispute resolution team.