The long awaited report from the Regeneration and Sustainability Committee of Liverpool Council has just been released. The City, and indeed much of the North West, has seen a proliferation of failed developments in recent years – many of which have been fractional developments.

The report shows that Liverpool Council’s Scrutiny Panel is disturbed by the lack of coherent advice to the public from sellers of non-traditionally funded property developments, considering this both a serious gap and a grave concern, not only in Liverpool but nationally.

David Niven, head of professional negligence and group actions at Penningtons Manches Cooper, congratulates the council on its report and welcomes its recommendations. David and his team are assisting investors to recover losses incurred through these and other failed property developments.

He observes: “Fractional ownership involves multiple unrelated parties investing in, and sharing the risk of, ownership of an asset such as real estate. One driver for this type of investment is that it enables buy-to-let owners to share the costs of maintaining property that they will not occupy themselves. There has been a proliferation of these schemes since the financial crisis of 2008.”

He continues: “The problem is that while the benefits of the investment are shared, so too are the liabilities, meaning that if schemes stall or go into administration, a large number of investors, who typically have paid deposits of up to 80%, have released money under considerable risk.”

Thousands of small investors have suffered losses due to such development failures from schemes in Liverpool and across other key cities in the UK. Among the most significant failed developments in Liverpool are: 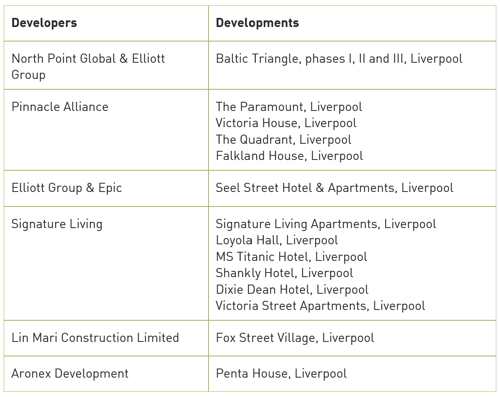 In welcoming the report, David hopes that it will reassure investors that Liverpool Council is seeking to overcome these failures by improving its policies, procedures and oversight of the development market.

The key findings of the report include:

Recommendations in the report include:

The report will go to the Regeneration Select Committee on 12 August 2020. Its recommendations will be processed and could be amended up to 31 October 2020, including by cabinet, following which there is expected to be a consultation period lasting until the end of the year.

A full copy of the report can be obtained from Liverpool Council.