In a judgment handed down on 24 September 2019, the General Court of the European Union has ruled that intellectual property rights in the iconic Vespa LX scooter have not been infringed by Chinese manufacturer Zhejiang and that its own motorcycle product produces a different overall impression to informed consumers.

The background to the case dates back to 2010, when Zhejiang Zhongneng Industry Group registered the following design (the ‘Zhejiang scooter’)as a Community design at the European Union Intellectual Property Office (EUIPO):

In 2014, Piaggio & C filed an application for a declaration of invalidity of that design at the EUIPO, claiming that the Zhejiang scooter lacked novelty and individual character in light of the ‘Vespa LX’ scooter design (see images below), first made available in 2005 and incorporating the lines and shape characteristics of the famous Vespa motorcycle, an icon of Italian design since 1945. Piaggio also argued that the Vespa LX scooter was protected in Italy as an unregistered three-dimensional trade mark and, in France and Italy, as a copyrighted work. 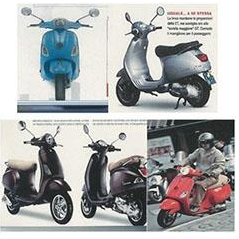 In 2015 (and confirmed in 2018), the EUIPO dismissed Piaggio’s request for a declaration of invalidity. Piaggio subsequently appealed to the General Court of the European Union on three grounds, all of which were rejected.

First, the General Court held that the informed user here is someone who uses a scooter for personal travel, would be aware of the various designs of commercially available scooters and would possess a certain degree of knowledge as to what these products normally comprised.

The General Court held that the Vespa LX scooter design had rounded lines whereas the Zhejiang scooter design had more angular lines and, as the informed user would be attentive to the several and significant differences in shape characteristics, concluded that the Zhejiang scooter and the Vespa LX scooter produced different overall impressions, rejecting Piaggio’s first ground of appeal.

A Community design may be declared invalid if a distinctive sign is used in a subsequent design, and the law of the member state governing that sign confers on the right holder of the sign the right to stop such use. Relying on Italian law, Piaggio submitted that the Zhejiang scooter had made use of the unregistered three-dimensional mark corresponding to the Vespa LX scooter. Case law also required Piaggio to establish that the relevant public would consider that the prior distinctive sign was being used in the subsequent Community design.

Here, the General Court stated that the relevant public likely to purchase scooters has a high level of attention and would perceive the style, lines and appearance that characterise the Vespa LX scooter as visually different from those of the Zhejiang scooter. Due to the different impressions of the two scooters, it held that there was no likelihood of confusion on the part of the relevant public.

A Community design may be declared invalid if the design constitutes an unauthorised use of a work protected under a member state’s copyright law. In this case, Piaggio argued that its prior design benefited from French and Italian copyright protection.

However, insofar as it encompassed its shape characteristics and its specific overall appearance endowed with a rounded feminine and vintage character, the General Court held that Piaggio’s copyright had not been the subject of unauthorised use in the Zhejiang scooter.

The case highlights how variations in lines and shape characteristics can be sufficient to produce a different overall impression, particularly where the informed user is paying a high level of attention.

This article has been co-written with Olivier Jacquelin, a trainee solicitor in the intellectual property team.