If companies can successfully attract investment from the US, they’ll garner much more than capital.

Investment from Silicon Valley into British companies has reached £1 billion for the first time, according to new research conducted by Penningtons Manches and released in our report From the Golden Gate to the Golden Triangle.

Based on investment activity from the US into the UK – specifically London, Oxford and Cambridge – the report reveals unprecedented levels of capital flowing into British software companies from the Bay Area. The number of deals has increased by 252% since 2011.

The findings are informed by a survey of business leaders in the UK, interviews with US investors such as Champion Hills Labs and 500 Startups and insights from technology experts based in the UK including Sherry Coutu, founder of the Scale Up Institute and Russ Shaw, founder of Tech London Advocates. 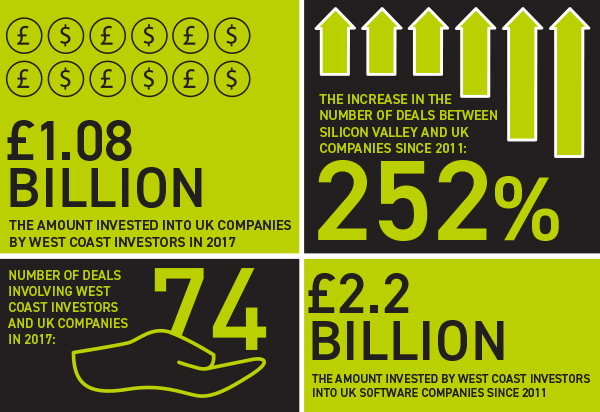 Penningtons Manches Cooper has a team of specialist lawyers operating locally in San Francisco to advise start-ups looking to expand or attract investment in the US and venture capital firms investing in British companies. Through our dedicated foreign direct investment (FDI) team, we are regarded as a leading firm for inward investment into Europe from the US.

The research was launched in San Francisco and will inform a series of formal discussions we are conducting with scale-up founders and investors in the UK. This reflects our commitment to accelerating the growth of British technology companies and advising entrepreneurs on how to capitalise on record levels of investment activity from Silicon Valley and the US.

“The figures back up what we’ve seen first-hand whilst on the ground in the Bay Area,” says partner Ross McNaughton, who heads the Penningtons Manches team in San Francisco. “Over recent years we have noticed an increase in the levels of US interest and investment in the UK, which has a particularly strong footprint in finance, retail and the creative industries. This has fuelled the start-up space and produced many scalable and investable companies.”

FIND OUT MORE: to download the report, access commentary and statistics from individual chapters or read the media release on the findings, click on the links in the right hand column.

How can we help?