A wider picture of overseas investment

Strong Silicon Valley investment into UK companies is part of a wider investment story which sees increases across the board. Our research has found that 2017 was a record year for levels of overseas investment into companies located in the UK, with 373 equity investments involving at least one fund headquartered abroad – a 62% increase on 2016.

Of the £8.27 billion worth of investments announced in 2017, 33% or £2.83 billion was contributed by deals involving at least one investor based in North America. £2.15 billion of this total involved US investors, representing 25% of all equity investment into UK companies in 2017. 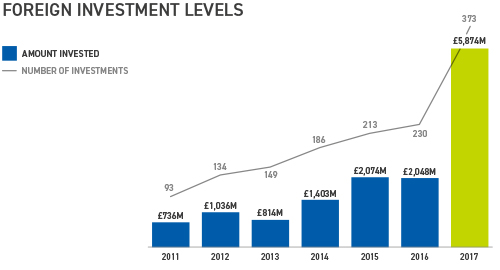 East Coast investment is also at an all-time high

The relationship between UK businesses and investors in the likes of New York and Boston is certainly getting stronger. Between 2011 and 2017, the total number of deals by East Coast investors into UK companies rose by 48% from 29 to 56. These deals represented 3.8% of all UK investment deals in 2017. 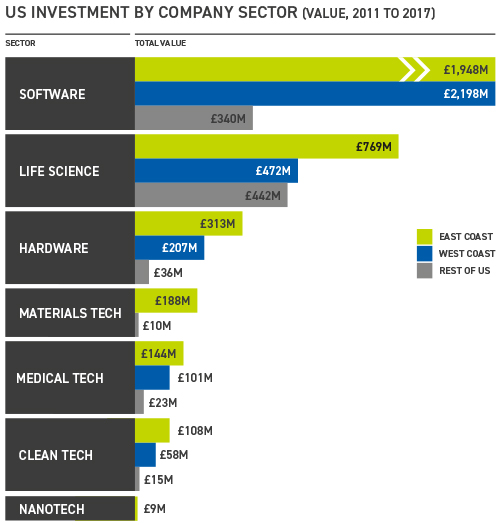 The UK’s Golden Triangle in the spotlight

The Golden Triangle – the cluster formed by London, Oxford and Cambridge – plays host to the majority of the UK’s most innovative tech companies. It is no surprise that this geography has been of most interest to US investors, keen to back UK ingenuity.

Our research has found that between 2011 and 2017, 79% of all US investment into UK companies went to the those in the Golden Triangle. In 2017, companies in this geography received record levels of capital from US investors, with £2.1 billion owing into companies there – a 64% increase on the year before.